Blepharitis is an infection of the eyelids.  Some patients call it granulated eyelids. Almost everyone has some form of blepharitis.  It is caused by bacteria that is part of our normal makeup but then gets out of hand and concentrates on the eyelids and eye.  Blepharitis causes problems for some people but not for others. Fortunately, blepharitis is relatively easy to treat. However, it is a chronic condition and needs to be taken care of on an ongoing basis, like brushing or flossing your teeth. 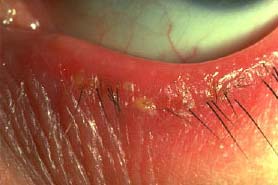 Crusting along eyelashes caused by blepharitis

Staphylococcus blepharitis is caused bacteria called Staphylococci, commonly known as "staph." It often begins in childhood and continues throughout adulthood. This form of the condition results in dandruff like debris and scales on the lashes along with crusting and chronic redness at the lid margin. If left untreated, loss of eyelashes can result along with red inflamed eyelids.  Eventually a blockage of the oil glands along the eyelid margins can lead to styes, also known as hordeolum or chalazia.  In severe cases, the cornea, the transparent covering of the front of the eyeball, may also become inflamed and vision affected.

Seborrheic blepharitis is a common form of this condition as well. It is not an infection but is caused by improper function of the oil glands, which causes greasy, waxy scales to accumulate along the eyelid margins. Seborrhea may be a part of an overall skin disorder that affects other areas. Dandruff of the scalp, hormones, nutrition, general physical condition and stress are factors in seborrhea.

Ocular Rosacea is the term used to describe blepharitis in its most severe form. Once diagnosed with Ocular Rosacea, oral medications are often required in addition to the topical measures used to treat blepharitis. 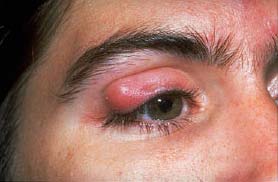 Hordeolum or sty of upper eyelid

In addition to eliminating redness and soreness, treatment can prevent potential infection and scarring of the cornea. You doctor will perform a complete eye examination to determine the most effective treatment.

Warm Soaks
Usually, blepharitis can be controlled by careful, daily cleaning of the eyelashes. Warm compresses (a wash cloth moistened with warm water) placed on the eyes several times a day is the best initial treatment for blepharitis. The wash cloth should be placed over both eyes until it begins to cool (five to ten minutes). This softens the accumulated oils and reduces the bacterial content of the eyelids. Artificial tears can be instilled into the eyes after each warm soak to increase the aqueous content of the tears and reduce the accumulation of the oil components of the tears on the eyelids.

If the warm soaks and artificial tears fail to control the blepharitis alone, the eyelid margins can be cleansed with lid scrubs. A few drops of baby shampoo in lukewarm water should be mixed in one's hand. Being careful to avoid getting shampoo in your eye, scrub back and forth along the eyelashes of all eyelids, either with a washcloth draped over your finger or a cotton swab (Q-tip). Rinse with plain tap water.

Once the redness and soreness are under control, this cleaning may be decreased from daily (usually at bedtime) to every other night. However, if the symptoms return, return to daily cleansing immediately.

Medication
In some cases, your doctor may prescribe eye drops or ointment to be used along with the daily cleansing regimen. For ointments, use a clean fingertip to rub a small amount into the eyelashes. Be careful to follow recommended dosages; excess medication will cause temporary blurring of vision. And with any medication, there is a small possibility of allergy or other reaction. If you think this is happening, stop the medication and contact your doctor immediately.

For certain types of blepharitis or ocular rosacea, prescription medications taken by mouth are helpful. Most of these medications are antibiotics that also improve or alter the oil composition of the eyelid oil glands. When taken properly, they are safe. However, side effects may occur in some individuals, including skin rash, slight nausea and increased sensitivity to sun.

Although medications may help control the symptoms of blepharitis, they alone are not sufficient; keeping the eyelids clean is essential.

If you think you may have blepharitis, your eye doctor can determine the cause and recommend the right therapy specifically designed for you.

Thank you for subscribing!

You will receive important news and updates from our practice directly to your inbox.